Filter By Category
All 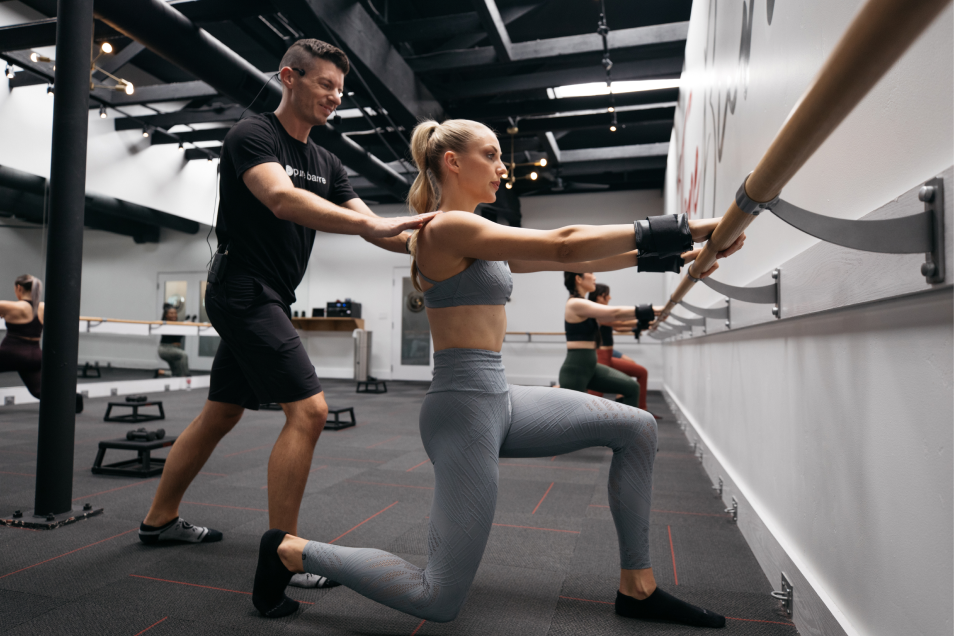 It’s PSL season! At Pure Barre, that means Pulse, Shake, Lift. One of the first things you notice at your first Pure Barre class is our unique lingo. Although our barre workouts feature many similar movements seen in other barre classes, you’ll hear our teachers use specific words for each motion. Using precise words helps us cue you through the choreography without confusion, and with proper form. Here are a few terms you may hear in your next Pure Barre class:

Tuck: A movement that involves contracting the abs back causing the hip to rotate forward to elongate the spine.

Heavy Tailbone: A position that is held by engaging the core and bringing the spine to neutral creating a straight line from the head to the tailbone.

Bendstretch: A tiny quiver in the joint followed immediately by an extension and contraction of the muscle being worked.

Up an inch, down an inch: A one inch range of movement in a slow controlled motion slightly larger than a pulse, smaller than a full range of motion.

Pulse: A downward movement from the lowest point to the tempo of the music.

Pressback: A movement of the knees backwards while keeping a heavy tailbone position. The two motions create the opposing forces at work to lean and tone the muscles.

Low Impact: An exercise that keeps at least one of your feet on the ground at all times.

Seat: Our polite term for your rear end.

What is a Pure Barre Tuck?

No movement is as synonymous with Pure Barre as the infamous tuck. According to our VP of Training and Technique, Katelyn DiGiorgio, in a typical Pure Barre class you can expect to hear the word “tuck” almost 50 times! Usually you’ll hear the cue to tuck in one of two ways. Sometimes your teacher is simply helping you to get into alignment before beginning the sequence (“tuck your hips”) and sometimes it will be an active movement set to the beat of the music (“and tuck…and tuck…and tuck…and tuck…).

In the first scenario, “tucking your hips” means elongating the tailbone downwards toward the floor to create a neutral spine. To effectively create this neutral spine position, try engaging your core and pulling your belly button in toward the spine. Most of us naturally have an anterior pelvic tilt (read: we stick our butts out)  from sitting at our desks and/or driving all day. The action of tucking our hips is meant to combat this overarching of the spine so you can safely move through the upcoming sequence by engaging the right muscles.

Other times, your instructor will guide you to “tuck” as a repetitive action with the music. In these sequences, the action of tucking your hips is actually helping to strengthen the tops of your thighs and build strength in your core. If it feels like you’re not doing anything, try focusing on engaging your core as you go through the movement. One of the main benefits of Pure Barre’s full body workout is the increased mind-muscle connection. This is cultivated during motions like the tuck, where it can be easy to go through the motions without actually drawing your attention to what your body is doing.

What does low impact workout mean?

You may have heard the term “low impact workout” and wondered what that actually means. Well, it’s actually pretty simple! According to the American Sports & Fitness Association, for a workout to be considered low impact, one foot must be on the floor at all times. This helps protect your joints from the impact of your foot hitting in the ground. Explosive exercises like jumping and running are considered high-impact, whereas workouts like Pilates and barre are considered low-impact.

Although high-impact exercises are not inherently bad for you, they can lead to injury in the long run if performed too frequently.  Low impact doesn’t necessarily mean low intensity! You can still turn up the heat while maintaining safe connection with the ground. Pure Barre is both low-impact and high-intensity, as your heart rate levels fluctuate throughout class. Low impact workouts like Pure Barre or cycling are safe and effective ways to break a sweat, while also being kinder on the joints.

Is Pure Barre an Effective Full Body Workout?
How to Prepare for Your First Barre Class
Your Guide to the Pure Barre Fall Fit Challenge